New Ecology’s ReMO system recently helped a building operations team save over $4,000 on service calls and avoid having contractors visit an affordable housing development that was being vigilant about social distancing to protect their residents, seniors and the mobility-impaired.

Photo: www.usmslab.com
While low temperatures are a comfort issue, they can also cause a serious health issue as the Legionella bacteria can grow in low water temperatures. Legionnaire’s Disease can be deadly on its own, but would also create a dangerous ‘underlying condition’ for anyone exposed to the Coronavirus. Seniors are especially vulnerable to both of these respiratory diseases.

New Ecology’s (NEI) ReMO system was installed to monitor this site, including water heater operation and distribution piping with carefully placed sensors. During the normal course of our work, we informed the owner that the DHW return was incorrectly piped, and that balancing valves needed to be installed. We advised the owner that the domestic hot water (DHW) system was occasionally delivering temperatures that were too low—below 110o F. NEI specified the repairs directly to the owner’s con- tractor in January, and offered to assist on balancing the system’s temperature when the work was completed.

In following weeks, our engineer began to review the post-repair data collected which illuminated that low DHW temperatures persisted, and in fact, the problem had worsened. Concurrently, the building staff had called their contractor again, as they were beginning to receive complaints from tenants. The contractor surmised that the issue must be caused by a new problem, the thermostatic mixing valve. They quoted $4,000 to do the replacement. They were ready to dispatch their team to the building.

New Ecology called the owner to suggest that system’s new balancing valves may not have been adjusted properly after the repairs, and that the problem was likely caused by the valve positions of the DHW recirculation system. To safeguard their tenants and solve the issue as quickly as possible, and save the cost and disruption of a repair that might be unneeded, the building staff joined a video conference with NEI and together they solved the problem.

How Was the ReMO Team Able to Identify, Diagnose and Fix the Problem?

The ReMO system collects data real time and enables understanding of cause and effect through analysis methods we have developed. The engineer was able to immediately determine that the DHW mixing valve was not faulty. Mixing valves are notoriously under-maintained, and so are a logical early consideration when troubleshooting. Our engineer then looked for other causes and saw that while the storage tank temperatures were within a normal range, water delivered to residents was only reaching adequate temperatures in short bursts. His experience led him to suspect the balancing valve positioning, which affect flow rates, as the problem. 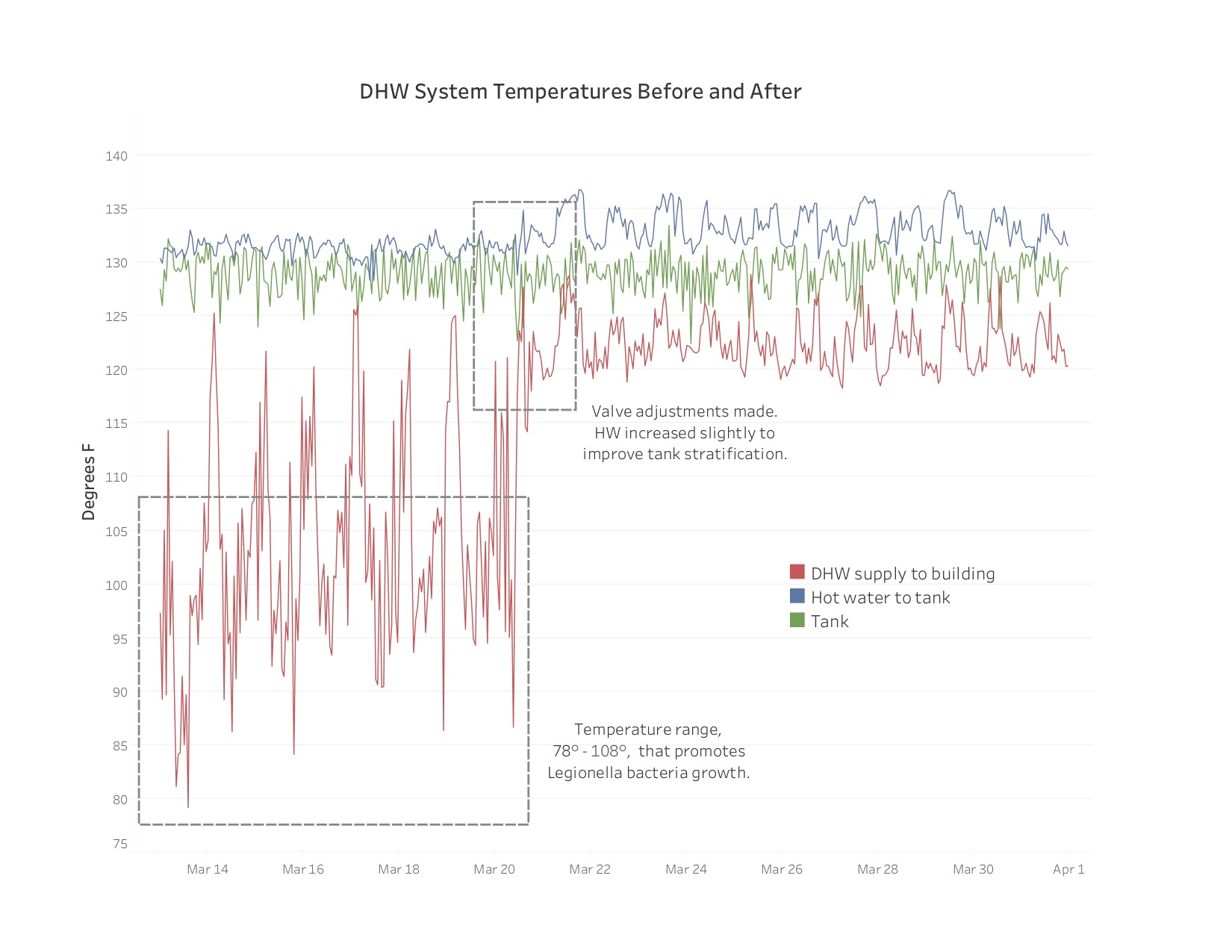 Though the contractor’s intentions were appropriate, they did not possess the data needed to make their diagnosis. Accurate trouble-shooting requires that the right data, from multiple points, be collected simultaneously and continuously. Doing so provides superior insight to identify and solve the real problem. The cost of at least one service call was avoided, and the senior residents were not put at risk from an unnecessary site visit by an outside contractor. The owner’s return on his investment in the ReMO service was drastically shortened by this single event, proving there is more than just energy savings to be had.