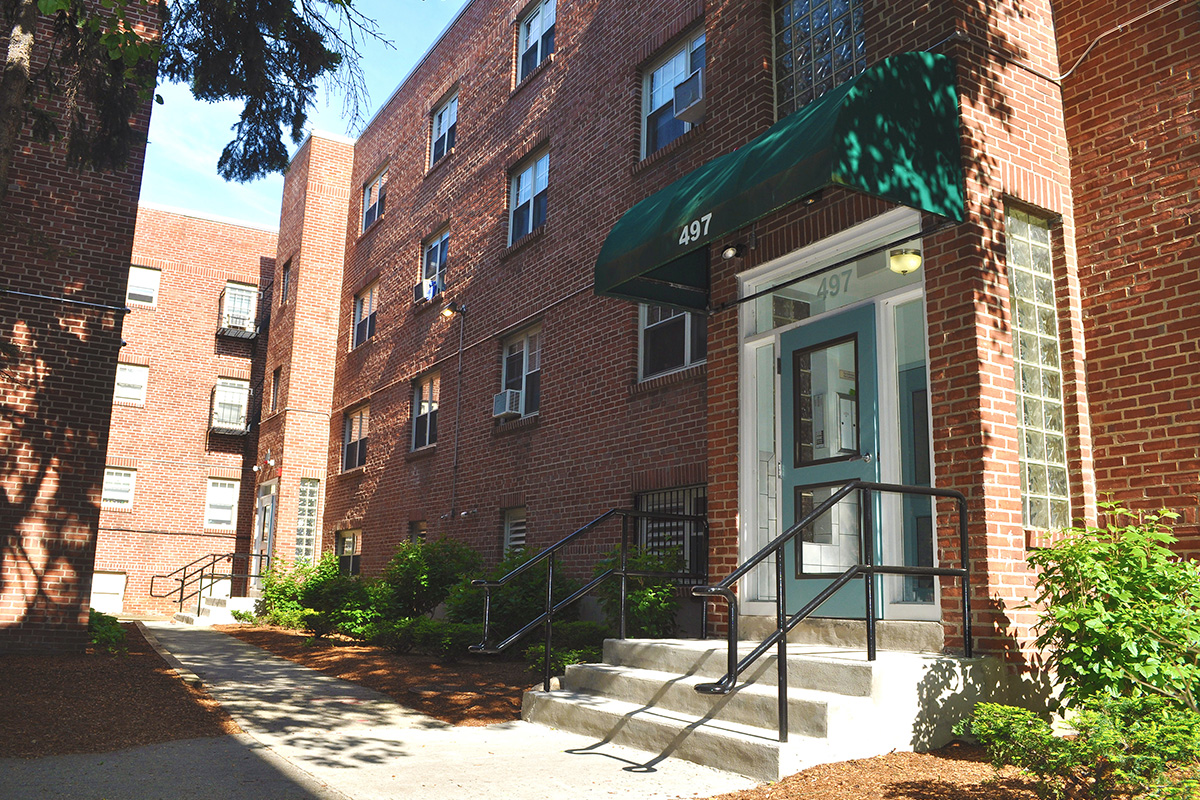 The Allston Brighton Community Development Corporation (ABCDC) joined MAGRI to secure technical assistance to evaluate and improve the performance of its entire portfolio. Through the initiative NEI and LISC Boston helped ABCDC benchmark its buildings in WegoWise, an online energy tracking tool, and assess the energy performance of its properties.

Brighton Allston Apartments was clearly ABCDC’s worst performer and it consumed nearly double the energy of comparable buildings. Data analysis revealed that the primary culprit was the property’s heating system as gas use attributed to heating was extremely high. NEI confirmed this fact through a site visit: one of the development’s two buildings was heated with a poorly controlled, aging steam boiler and an inefficient distribution system. The setup resulted in overheating during the winter, and tenants then opened the windows for relief and exacerbated the problem.

With the problem clearly defined and the owner motivated to fix it, especially due to the development’s performance relative to its peers, ABCDC, NEI, and LISC Boston collaborated to develop a strategy to comprehensively upgrade the development.

NEI and LISC Boston sought rebates for ABCDC from Massachusetts’ low-income utility efficiency program. The program could incentivize replacement of the steam boiler with a hot water boiler, but was unable to fund necessary changes to the distribution system, without which a hot water boiler could not be installed. And unfortunately, the property’s reserves were insufficient to pay for a new distribution system.

To solve the funding problem, NEI and LISC Boston pursued limited-time grant funding for the distribution system and ABCDC combined the work with other planned upgrades through a refinancing of the property, which unlocked multiple opportunities. NEI and LISC Boston submitted a grant application to a Boston Redevelopment Authority (BRA) demonstration program to replace the building’s distribution system. The BRA’s support made it possible for the utility efficiency program to replace the steam boiler with new, high-efficiency condensing hot water boilers and to insulate and air seal the buildings. Through refinancing, the property installed a new roof, making one of the two buildings a prime candidate for a solar thermal system, which was installed thanks to a pilot of the utility efficiency program.

Ultimately, the complex upgrade was feasible only because MAGRI provided the technical assistance needed to coordinate the combination of grants, utility efficiency program incentives, and refinancing. The improvements delivered a 55 percent reduction in gas use at one of the development’s two buildings through the overhaul of the heating and distribution systems, building envelope improvements, and installation of the solar thermal system. At the second building, insulation and air sealing yielded an eight percent reduction in gas consumption. Overall, the upgrades resulted in a 46 percent reduction in the development’s total gas consumption and save the owner $25,357 in avoided annual utility expenses.